Hey loves! Hope everyone’s week is off to a good start. Mine is going pretty well so far.

So, I think it’s safe to say that I kind of have a thing for nail polish. Well, there’s a little history behind it. 🙂 I started working when I was 15 years old so I was the kind of girl that was always used to having a job. So when, my job “ran out of stuff for me to do” ( I was doing admin work) I felt lost. I know, it’s dramatic but when you’ve been working since the legal age, it’s awkward not having a job.

Not to mention, I was one of those Shanaynay eagle talon nails loving girls. In the nail salon as soon as I could get enough cash. And I didn’t play it safe with all that french manicure stuff. I wore bright colors with lots of rhinestones and other types of adhesives (read: GHETTO). But I got tired of them messing up my real nails and started doing them myself. Not to mention, I was going through this whole I’m a vegetarian, no flat irons or makeup, we are the world phase. Actually, not much has changed…minus the makeup…and meat! 😉 But I’m on a revolving journey. More about that later.

Anywho, while I was unemployed I would to it to pass time and relieve tension. Like, I was a perfectionist about my nails. Now, I have a lot less time, but I still do it for stress relief. Weird, I know. *shrugs*

Anywho, this is one of my fave nail polishes! I even got my ace addicted to it! This past week we both put it on (unknowingly). So I feel like it’s “our” nail polish because we’re just that friggin cool. *shrugs* 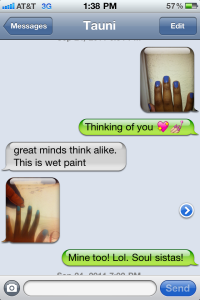