Hellooooo there! [I know, I know. Long time no blog. We know the deal by now so let’s just hop right in.]

I recently decided to purchase Urban Decay’s de-slick makeup setting spray. I had seen it on YouTube (don’t watch beauty gurus if you’re trying to be frugal. They can convince you to buy anything) a couple of years ago but didn’t think much of it. Of course, I continued to see it, and always secretly wanted to purchase it, but never made the commitment. I had forgotten about it until recently when I watched a makeup tutorial and it was used. So, I decided to go ahead and give it a try.

It cost $24.99 (I believe- don’t have the receipt on hand). That’s a splurge for me. I don’t like to spend a whole lot of money on…well, anything, but I figured that I wouldn’t be using it all that frequently so it would last a while. 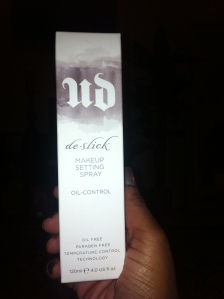 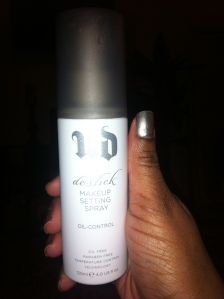 It doesn’t smell like much of anything, which is good because…it’s sitting on your face. I have sensitive skin so I get nervous about using liquid anything on my face, especially if it has a strong smell.

I expected it to feel cool on my face, but it didn’t. However, it was so light weight that I didn’t notice it at all. It definitely did its job. I’m a grease monkey, and I didn’t experience any serious oil production like I usually do. I am pleased with it so far, but I want to give it a few more tries before I call it a keeper.

I used it under pretty mild conditions: cool weather, and short time frame. I’ll have to use it on a warmer day and for a long period of time before I can really say whether or not it’s worth the hype or the price. Can’t wait to try it out and see!