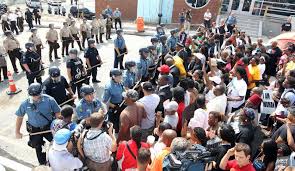 Don’t. Please don’t. In fact, you should be glad that you are not immediately assumed to be lazy, undocumented, on government assistance (because, apparently that is a crime), inarticulate, ignorant, and/or a threat to society at first glance. While this may work out in your favor, many others do not get to enjoy that luxury.

I’ve had to endure my Anglo brothers’ and sisters’ grievances regarding their displeasure by the portrayal of white people because of some high profile cases as of late. The most recent being the shooting of Mike Brown in Ferguson, Missourri. I’ve heard complaints about the “ignorance” of the saying “F**k the Police!”, questions such as, “Why does everything have to be about race? Maybe the cop just made a mistake”, statements referring to Mike Brown as “some thug” who deserved what he got because he robbed a gas station, and the absolute denunciation of the existence of white privilege.

While, as an African American female ( a double minority), I could make a legitimate, personal, narrow-focused argument about the treatment of my people and why we don’t like cops because of the history of the way they have treated us, and the fact that there’s absolutely no reason that a human should be killed because he, allegedly, stole some cigars from a gas station *eye roll*; but, at the end of the day, it’s not really about Mike Brown. It’s about division and apathy.

It’s the reason we can’t see eye to eye and the reason why progress is so hard to come by. It’s the problem of the majority. The majority sees it as a minority problem, when in fact, it boils down to a human problem.

No one has a problem with white people because they are white. No one wants you to apologize for who you were born to. You see, everyone else just wants to, also, enjoy the luxury of not being penalized for who he/she was born to. We are not upset because white people are white people. We are upset by the “it’s not my problem because it doesn’t affect me”, “I don’t see it so it must not exist” attitudes of those who are in the majority and choose to be dismissive, and/or judgmental of the struggles minorities face.

We don’t want you to apologize for being a man. We want you to open your eyes and stop slut shaming, stop participating in sexual harrassment, and stand up for the girl who gets groped by a stranger in the subway.

We do not want you to apologize for being straight. We want you to stop using gay slurs, and stand up for the transgendered man who is forced to walk outside and use a port-a-potty, because his company “doesn’t know how to adjust” the restroom policy.

We don’t want you to give up your citizenship. We want you to stop calling people “illegal” and acting like people trying to come here for better opportunities (as ALL of your ancestors did once upon a time) makes them blights on society. Fast food has done more harm to the population than “those Mexicans”. Becoming a citizen is hard, okay?

And for Pete’s sake, we don’t want you to apologize for being white. We want you to accept that the cops come in and terrorize black neighborhoods and nobody bats an eyelash because “those thugs” are only viewed as valuable for entertainment purposes. We want you to accept that it’s hard being marginalized as a threat or as a [fill in the blank with negative stereotype]. I mean, when was the last time a black person was stereotyped as smart or wealthy? If we want to get mad about it, let us get mad about it! You should get mad too and either join the PD and be a good cop, or sign a petition to get “those thugs”- I’m referring to the trigger happy cops out there- off the streets. 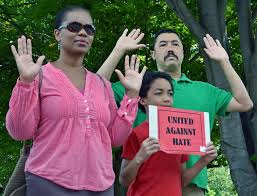 The problem of the majority is: it’s easy to make assumptions about, and undermine a struggle that isn’t yours. But it doesn’t have to be that way. You can try to understand. You can become informed. You can support the movement. A race crime, a hate crime, a sex crime; it doesn’t matter. They are ALL crimes against humanity. If you are a human, then it is your problem.

Do something. Do something to help. But if you insist on not doing anything, please don’t insist on  playing the victim in somebody else’s tragedy.

One thought on “I’m Not Going to Apologize for Being White: The Problem of the Majority”