I know it’s inflammatory to say, but I’m pretty sure the entire internet has gone vegan. The other day one of my friends posted on Facebook that she went to her usual farmer’s market and he was out of stock on a lot of the items she usually buys. Between all my favorite YouTube gurus and bloggers deciding to adopt plant-based diets and What the Health taking the US by storm, this whole vegan thing has become a little less hippie dippy and a lot more mainstream.
Those who grew up with me know that I did a stint of vegetarianism while I was in high school, then later transitioned to a pescatarian diet. This went on for about a year and a half and then…my mom made spaghetti. And that was the end of that. Ever since, I’ve gone back and forth deciding whether or not I should go vegan and my final answer is: nah.

Before you get all judgmental let me explain. I love food. I am passionate about it. I love to cook and to eat and to serve food for others. Whenever I go on vacation or a trip, I am the one in the group who plans the food. It’s my thing.

Recently, my husband and I decided to have a date night. We went to Houston’s and didn’t like the wait time or the atmosphere. We went to Lawry’s and didn’t really like the vibe. So, we ended up at Ruth’s Chris. The receptionist was rude to us and we let the manager know, so we were kindly gifted with Jumbo shrimp cocktail to enjoy as we browsed the menu. I ordered a caesar salad, and the crab cakes and Jarell ordered a New York strip with coffee jam which came with a bowl of gumbo. We shared the lobster mac and creamed spinach as sides. And it was impeccable. The steak was cooked to perfection. Jarell only eats well-done steaks and it was still juicy and tender. The crab cakes were made with, ya know, actual crab and not a bunch of breaded crap. The mac and cheese was chock-full of lobster and super creamy but not obnoxiously cheesy. All I needed was sparkling water with a little bit of lemon and lime to wash it all down. 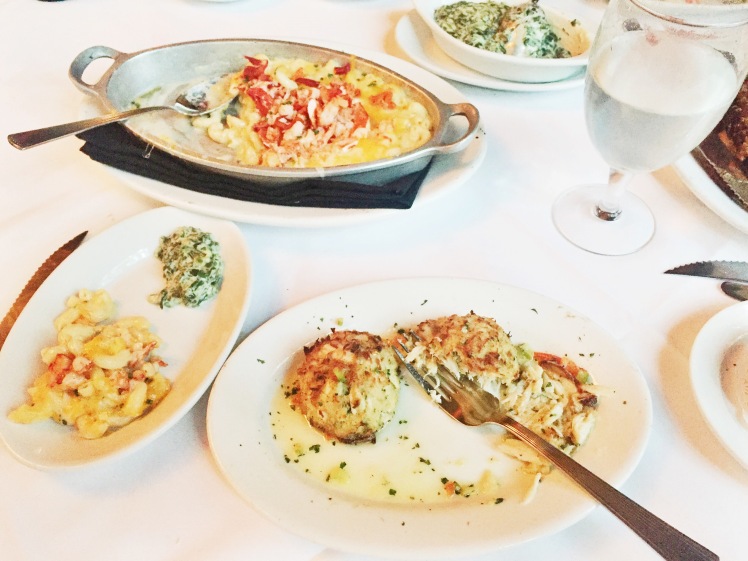 And that’s when I realized that I did not want to be a vegan. Because I would not be able to do this. There is no substitute for a crab cake or for shrimp cocktail. And even if there were (because it’s 2017) I wouldn’t dare try it. I’m actually not a huge meat eater and I’m in a swing right now where I don’t care for it too much so I’m going with it. I think that whether you’re a carnivore, vegan, or flexitarian, it’s paramount to include plenty of fresh fruits and veggies into your diet. That’s simply science. No one ever died from eating too much spinach, but plenty of people have heart disease as a result of eating too many animal products and processed foods. It’s easy to eat too much meat and dairy but it’s pretty difficult to eat too much fresh produce, and I think that says a lot about the balance we should have in our diets.

I respect everyone’s food choices. Whether they’re doing it for health, elevating their vibes, trying to save the planet, for the ‘gram, or out of sheer pleasure, I think the most important things to do are to be mindful and listen to your body. I don’t think any one thing works for everyone. But I believe in paying attention to how you feel before, during, and after you eat what you eat- and there lies your answer. As for me and my house, we’ll be incorporating as many fruits and veggies as we can on the daily, and not sweating it about enjoying a good crab cake when the notion strikes.